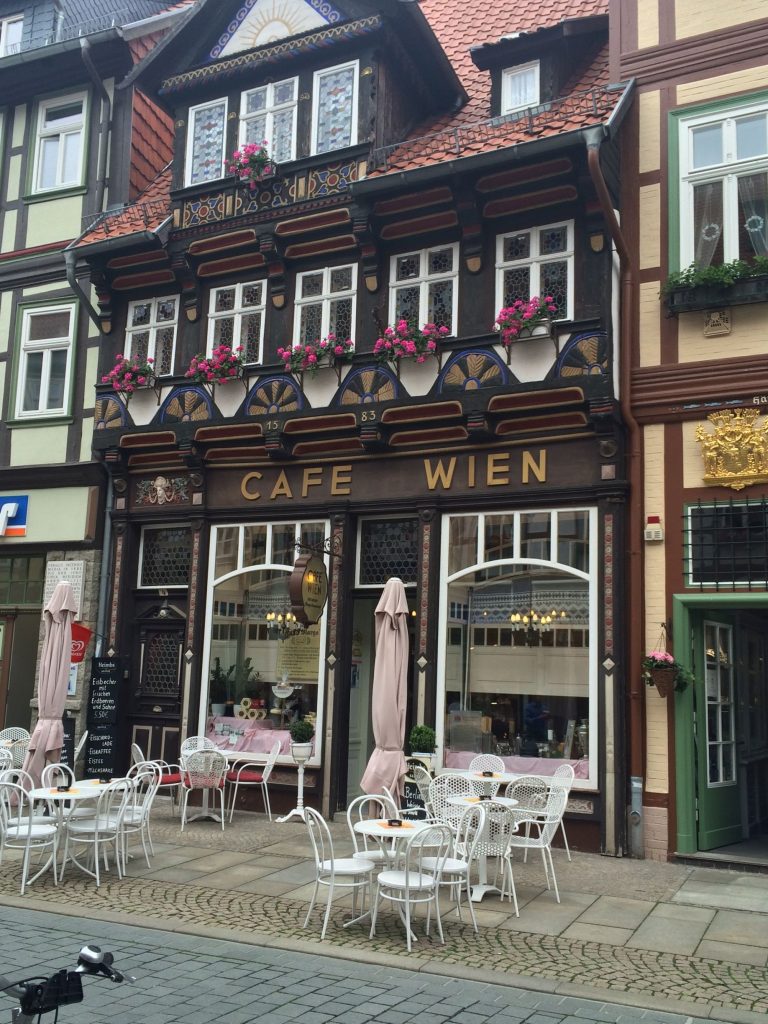 Wernigerode is a charming German town with great architectural depth. As you stroll along its streets, you can watch the evolution of the half-timbered style: you’ll see half-timbered buildings from six centuries, and often the buildings in the Old Town are newer than those in New Town.

The reason for this is simple, and not unusual in a place with so much wooden architecture. Wernigerode has experienced a serious town fire once almost every century over the last 600 years, and after each fire the buildings were reconstructed in the then-current style.

My tour began in New Town with guide Christiane Oldendorf. One of the first things she pointed out was the cross and diamond decoration on much of the half-timbered architecture. You can see it in the building at 32 Grün Strass (below), which was built in 1688.

“It isn’t just decoration,” Oldendorf explained. “It represents the hopes and wishes of the people who lived there. The curved diamond was a symbol for fertility – in people, livestock, and crops. And the St Andrew’s cross symbolizes more of what you already have. People hoped it brought more of the good in their lives.”

She also explained the tall gateways in this part of the city. “New Town was a town of farmers,” she said. “Farmers brought their horse carriages right in through those doors.”

Old and New Towns were separate entities for 300 years with their own governments and utilities, but they united in 1528 after one of the city’s worst fires. Much of the wall that separated and protected them was destroyed in the industrial revolution, although plaques in the sidewalk indicate where the wall once stood.

The Romanesque style Johanniskirche is the oldest surviving church in Wernigerode, despite it being in New Town. The earliest sections were built in 1279, while the Romanesque nave was finished in 1497. Its most outstanding feature is the four-winged altar that dates back to 1415, with depictions of the nativity, Christ’s life, passion and resurrection.

Moving on to the Old Town, many of the buildings date back only to the mid-19th century, as a massive fire in 1847 burned most of them down, leaving over 1000 people homeless. “You can tell the youth of the buildings,” said Oldendorfe, “because they’re more even in their construction.”

Wernigerode is internationally known for its steam train, which operates out of its own station. The steam train is most popular among German train enthusiasts and nature lovers, but a good number of Great Britain trainspotters travel to Wernigerode every year to ride it. The Harz Railway operates three routes, with the most popular being the ride to Mt. Brocken, the highest mountain in the district.

In addition to being the centre for nature tourism, Mt. Brocken is a highlight of area lore. According to folk legend, all the witches in the area fly to Mt. Brocken on the night of April 30 – May 1 (Walpurgis night) to meet the devil. Traditionally, city hall is stormed by “witches,” and many townspeople and visitors make their way to Mt. Brocken for celebration.

Goethe was inspired by this legend, writing about it in Faust:

“Now to the Brocken the witches ride;

The stubble is gold and the corn is green;

There is the carnival crew to be seen,

And Squire Urianus will come to preside.”

Look for witch ornaments and effigies throughout Wernigerode: they’ve become a symbol of the region.

I visited one of the twice-weekly market days. Oldendorf said the market represents one of the things she likes best about the town. “It’s a small community,” she said, “not a tourist attraction.” She pointed to a man selling fresh cherries in the market. “He knows all his customers because they buy from him regularly. Wernigerode is just a village that happens to attract a lot of visitors.” 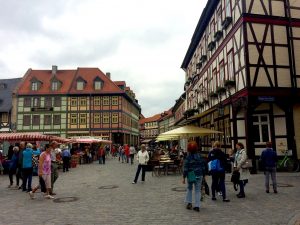 Café Wien, built in 1583 in a Lower Saxony Renaissance style, sits just off the market square. It narrowly missed being burned in the 1847 town fire, with the fire stopping just a few buildings away.

Oldendorf talked about what makes it representative of a building of its time: “Between the upper windows are cleats, or brackets, with multiple grooves, which merge into golden shields. The joist is decorated with a double ship-like carved notch, which is very typical for that style, time and region.” She explained that other decorative forms of the Renaissance – palmettes, rosettes and fan roses – are found on buildings throughout town. “They symbolize the sun, and even life itself.”

Wernigerode Castle was owned by Otto zu Stolberg-Wernigerode, a local luminary who became Deputy Prime Minister of Prussia and Vice Chancellor of the German Reich in the late 19th century. He had major reconstruction work done on the castle and its courtyard between 1862 and 1885, using the existing structures that dated back to the Middle Ages.

In the courtyard photo, Renaissance-style wood carvings depict Otto, his wife Anna, and six of their children. Other carvings reveal scenes from the history of the castle. Countess Anna was artistically inclined, and designed several of the features in the castle and the yard.

The castle interior is impressive, and the highlight is the banquet hall, which has been styled to represent the first visit of Emperor Wilhelm II to the castle. The napkins, flower arrangements and menu cards match those used the night he visited, and in the next room the musical program for the night is on display.

The rathaus, or town hall, began its life in the early 15th century as a playhouse. However, the fire of 1528 burned down 85% of the town, including the old town hall. City councilors temporarily moved into the undamaged playhouse, and later converted it into the new town hall. They later merged the building with a merchant’s house and built an extra addition.

Oldendorf pointed out the carvings on the side of the town hall. “I don’t know if an English word exists for that piece in a framework building,” she said, “but I call the carved figures ‘cleat figures.’ The ‘cleat’ is the wooden bracket under the beam ends on the outside of the façade where the next story begins.”

“The oldest ones date back to the late 15th century, when the building was still the Spielhus (playhouse),” she said. “In the late Middle Ages, they conveyed pictorial messages and represented wishes.” These figures ran the gamut from saints to fools making obscene gestures.

The photo above shows some of the figures that were added in 1939. The ones shown represent a miner, chimney sweeper, sculptor, carpenter, blacksmith, and bricklayer. “Wernigerode was a town of traders and craftsmen, so that theme was picked when the eastern façade was renovated and decorated.”

It’s thanks to those traders and craftsmen that historical Wernigerode had the ability to rebuild itself after tragedy time and time again, and now represents the changing face of half-timbered architecture.

Die Stuben: This comfortable dining room features both German and international offerings. The Chicken Roulade was served with plump pockets of truffle gnocchi, and the Apricot tarte was almost too elegant to eat. Marktplatz 2, Wernigerode.

Consider taking a city tour with guide Christiane Oldendorf. Christiane is knowledgeable about the city and its history, and is a great option for English-speaking tourists who want to get to know Wernigerode. Contact her at [email protected].

Notes: The author visited Wernigerode as a guest of the Investment and Marketing Corporation of Saxony-Anhalt, who did not review or approve this story.