“They took her choice and her life away”: CARP Member blames long-term care, not COVID-19, for her mother’s death - CARP
Join Donate Sign In 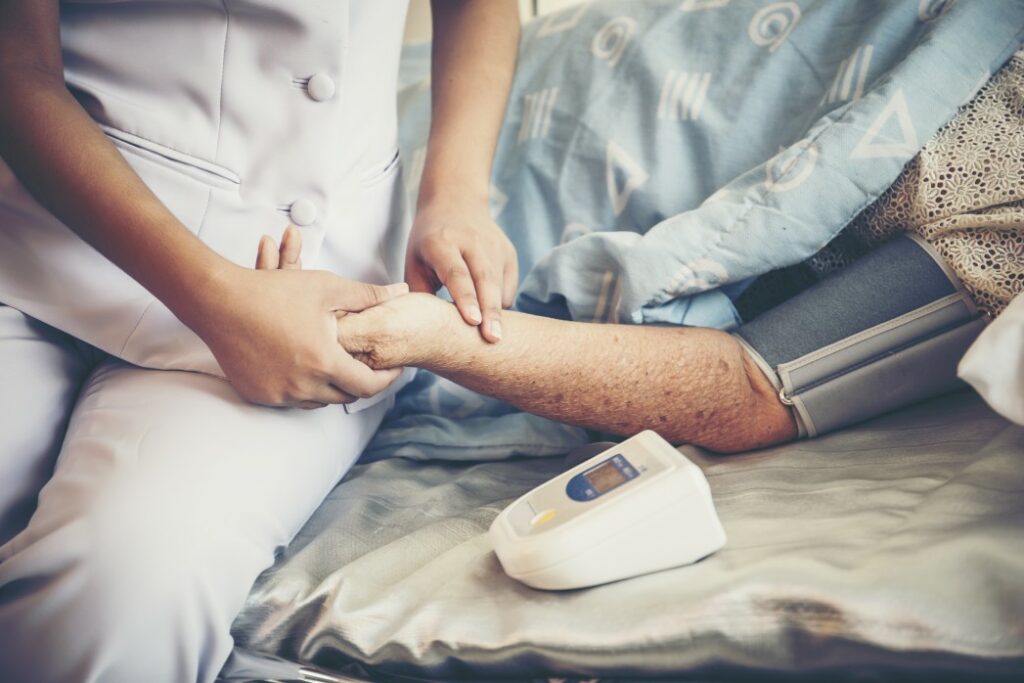 Doreen Jensen, an active CARP Member in Cambridge, ON, recently reached out to share with us the story of her mother’s death in a long-term care home overwhelmed by COVID-19.

It’s a story that’s as important as it is difficult to read—a story made all the more tragic by the unsettling fact that, according to Doreen, “COVID didn’t kill my mom—the system did.”

Doreen’s mother Joyce, who had dementia, was a resident of a long-term care home in Kitchener, ON. When she received a call on April 4th that her mother had contracted COVID-19, she was prepared for the fatal toll the virus may take. However, she wasn’t prepared for the sequential breakdown in the home’s communication and the uncoordinated outbreak response that she believes led to Joyce’s death on May 3rd at the age of 89.

After testing positive for the coronavirus, Joyce was put into quarantine. However, Doreen wasn’t confident in what that meant, as there were accounts of another quarantined resident in a four-person room, sequestered from their roommates by a flimsy curtain. “It seems that they would have done the same for my mom but, as lockdown did not allow me in, I couldn’t say for sure.” She says an x-ray showed that Joyce also had pneumonia in one lung. Doreen and her mother had made clear their opposition to a DNR (do not resuscitate order, in the case of end-of-life circumstances); opting for life-saving efforts to be made in a worst-case scenario. “The doctors phoned when she was diagnosed, trying to push me into signing a DNR—I said it was my mom’s wishes not to have one,” she recounts. “I relayed this to the social worker, who said she would convey my wishes to the medical team.”

Three weeks later, Doreen got the good news that her mother had recovered from COVID-19.

Unfortunately, her relief was short-lived. “All of my inquiries were met with ‘she’s doing well’. Then I began to get answers that indicated she was on a different floor,” says Doreen. When she spoke to Joyce on the phone, she knew something was wrong. “She sounded like she was gasping for air and calling my name.” The call only lasted a few difficult minutes, but it was enough to commit Doreen to getting the truth about her mother’s condition. “I called the next night only to be told they were too busy to talk to me and that someone would call me the next day.”

But no one did. The next time she heard from the facilty on Thursday April 30th, it was to tell her that Joyce was dying and that she should see her as soon as possible to say goodbye.

After checking into the home later that day, and following the requisite safety protocols, Doreen was taken to a four-bed room on the second floor—not her mother’s normal room. “There was someone else’s name on the wardrobe,” remembers Doreen. Even more concerning was Joyce’s condition. “She looked like a mummy—skin stretched tight across her skull, skeletal arms and open mouth. I thought I had made it just in time.” The communal setting made it impossible to focus on her mother in what could easily have been her final moments. “I was trying to hold my mom’s hand and talk to her but the other residents are curious and want to see what’s going on. I kept fielding their questions. I felt for them and understood—if it was someone else, my Mom would have done the same thing. But she was dying and there was no peace or privacy.”

Things only escalated from there.

Doreen noticed that Joyce appeared to have had a stroke. “She could only move one hand and leg and couldn’t talk nor could she unclench her one hand.” A doctor, not the one who had told her Joyce no longer had COVID-19, informed her that her mother had tested positive again. “I asked how that was possible, since the other doctor told me she had recovered.” This doctor’s reaction unsettled her. “He smiled broadly and said he hoped I was right, as then they wouldn’t have to count her [in their case number].” She says he seemed “absolutely gleeful”. When she asked “don’t you think it’s moot at this point?”, referencing her mother’s deteriorating condition, Doreen says his smile disappeared and he “mumbled something about relapse and promptly left”. Shortly after, Joyce was moved to a private room.

Doreen is quick to note that the front-line workers in the home were thoughtful and hard-working, checking in on her frequently and offering her food and drinks, yet were obviously overburdened and struggling to provide care. After over 12 hours by her mother’s side, during which Joyce seemed to stabilize, Doreen went home to rest. The next day followed the same course, with Doreen arriving early to spend the day at her mother’s bedside. “They told me they hadn’t expected her to see morning,” she recalls. “I stayed all day and all night with her, holding her hand, rubbing her shoulders, telling her how much I loved her.”

The day after that, Saturday, Doreen returned to the home to find Joyce was severely malnourished and dehydrated. Worrying that this was exacerbating her mother’s declining condition, she requested that she be fed using a feeding tube. She was told that wasn’t possible, as Joyce might pull it out—a concern Doreen didn’t share as she didn’t think her mother had the strength. When she inquired if intravenous feeding was an option, staff told her it wasn’t, advising her to give up the issue. “To me they were treating her as if she had a DNR,” says Doreen. Given that both her and her mother had repeatedly enforced their opposition to a Do Not Resuscitate order, this was deeply concerning. After having stayed up all night, a feat of willpower Doreen was happy to undertake (“She was there for my first breath, I should be here for her last”), she finally hit a wall and went home to rest before returning to her mother’s side.

Joyce didn’t make it through the night.

“They asked if I wanted to come and see the body,” she recounts. “I said no as I’d already spent the better part of three days there and seen enough of her suffering. It’s not a picture I want in my head, but can’t erase.”

Still reeling from her mother’s death, Doreen joins the thousands of other mourning children left to piece together the story of their parents’ last days. While she doesn’t blame the Personal Support Workers and nurses working on the floors, she says her mother’s story shouldn’t have ended this way. “They should not have thrown her back in with the other COVID patients. They told me they discussed sending her to the hospital but that she was doing too well.” Doreen says it felt like the home disregarded her and her mother’s wishes, taking away their freedom of choice in how Joyce’s final days played out. “By withholding fluids I believe they made things harder for her.”

“I know that no one expected this pandemic,” she concedes, “but it felt to me as if the company and doctors thought their job was to warehouse dementia patients with no quality of life, and that no effort should be put towards saving them.”

“My mother deserved a chance, I feel they took her choice, and her life away.”

As Doreen continues to process these tragic events, she has this message for the province’s Minister of Long-term Care: “I’m fearful of ever ending up in a place like that—no dignity nor privacy for the living or the dying. I beg of you, please get rid of four bed wards, hire more nurses and PSW’s so there is not so high a ratio of patients per worker, stop part-time workers from rotating between homes, and hire doctors who know how to care for people with dementia.”

“Most importantly,” she stresses, “don’t look at a dementia patient as someone with no quality of life—see the life and figure out how to make the quality better.”

She ends with a sobering message: “Warehousing is for products, not people.”

CARP stands behind Doreen and her late mother, and won’t stop demanding better long-term care until stories like this seem like a distant and devastating memory.

Find out about our long-term care advocacy