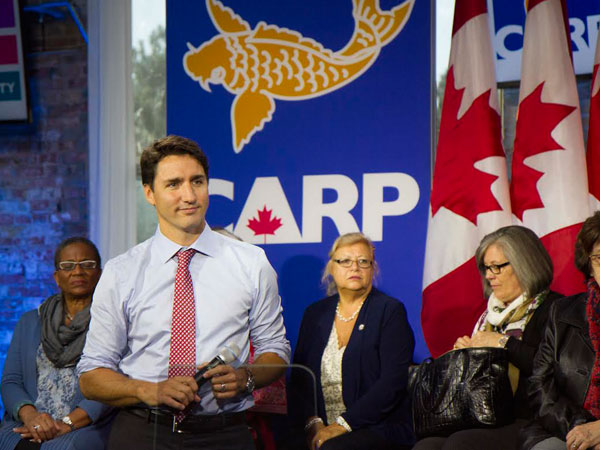 Montréal, May 26, 2021 – The Canadian Association of Retired Persons (CARP), National Association of Federal Retirees (NAFR) and Réseau FADOQ have joined forces to urge the Trudeau government to rectify discriminatory measures in the 2021 federal budget.

The three organizations, representing more than one million seniors across the country, are calling on the Liberal government to increase Old Age Security benefits by 10% for all eligible seniors, starting at age 65. On April 19, Finance Minister Chrystia Freeland announced that the increase would only be available to those aged 75 and over. This measure discriminates on the basis of age and risks setting a dangerous precedent by creating two classes of seniors.

“The realization by Canadians between the ages of 65 and 75 that they are not being included in the increased OAS payments has created huge concern and frustration. The OAS increase should be extended to everyone at age 65 and the 10% increase should be immediate, not delayed until 2022,” says Bill VanGorder, Chief Operating and Policy Officer of C.A.R.P.
“Federal retirees have long advocated for a comprehensive seniors’ strategy, which includes retirement income security for all seniors,” says Federal Retirees President Jean-Guy Soulière. “An increase in Old Age Security for all eligible seniors, and in the Guaranteed Income Supplement for particularly vulnerable seniors, would be positive steps in this direction. ”
“Financial insecurity is not age-based. Contrary to what Prime Minister Justin Trudeau says, this is a sad reality for seniors under 75. We’re calling for substantial, permanent and inclusive financial assistance,” says Réseau FADOQ president Gisèle Tassé-Goodman.

Below the poverty line

CARP, NAFR and Réseau FADOQ know from their members that financial distress among seniors aged 65 and over is widespread. These three seniors organizations will continue to press the Canadian government to be more sensitive to the financial plight of seniors—a fact and a hardship for rising numbers of individuals aged 65 and over.

People whose only source of income is Old Age Security and the Guaranteed Income Supplement receive $18,505.92 annually, an amount that barely reaches the official poverty line established by the Market Basket Measure (MBM), which exceeds $21,000, particularly in large urban centres. In addition, certain non-discretionary components are excluded from the definition of the MBM basket, such as dental and vision care expenses and medications.

Seniors are therefore in a financially precarious situation. The amounts provided through Old Age Security and the Guaranteed Income Supplement must be sufficient to meet the basic needs included in the MBM.

As a starting point, the federal government must commit to a 10% increase in Old Age Security benefits for all eligible seniors. To reach the official poverty line in Canada, as determined by the federal government itself, the Guaranteed Income Supplement, a program for the lowest income seniors across the country should also be increased.

CARP is a non-profit, non-partisan association representing over 320,000 older Canadians in Canada. CARP advocates for the rights and lives of aging Canadians. CARP’s policy platform, Faces of Canadian Seniors, urges the government to support affordable and safer long-term care options across the country. www.carp.ca.

The National Association of Federal Retirees was established in 1963 to represent the interests of federal retirees and protect their benefits. With 170,000 members in 79 chapters across Canada, it is recognized as the leading organization representing federal retirees.

With over 550,000 members Réseau FADOQ is the largest seniors organization in Canada. Its mission is to group and represent people aged 50 and over to help them maintain and enhance their quality of life. The organization defends and promotes their rights and highlights their contributions to society. It provides many programs, services, and activities, including a wide range of recreational activities to encourage seniors to remain active.