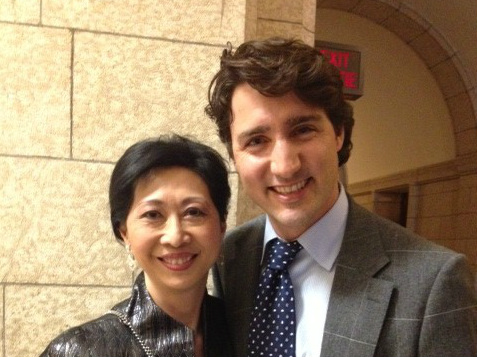 You might have thought that CARP went to Ottawa to attend the budget lockup but the real purpose was to track down Justin Trudeau and get him to accept one of our invitations… Just kidding!

In all seriousness, CARP was on Parliament Hill Thursday (March 21st 2013) to attend the stakeholder budget lockup so that we could be the first out of the gate with an analysis of what the government has planned for seniors this year – and guess who we spotted? None other than J.T. himself!

It could potentially have been an awkward exchange given we had just called him out in the media for passing on our invitation to participate in the CARP Leadership Forum –  but in politics as in advocacy – it’s not personal – once the moment’s over, it’s over.

CARP VP of Advocacy Susan Eng spotted Justin and took the opportunity to reach out – Justin, to his credit, was VERY gracious!  We can tell you from experience that politicians are not always so cordial to people and organizations that have just resulted in bad press for them!  Overall it was a very amiable exchange (you can see Susan even snapped a picture with Justin and we’re assured that the smiles were genuine).

After the encounter, we immediately Tweeted the photo out to our followers saying “Look who we bumped into! We regret @JustinTrudeau couldn’t make our Leadership Forum – could our AGM be a possibility?”

We informed him that our next Annual General Meeting is the last Friday of October and invited him to meet our Chapter Chairs from across the country in October 2013.  We will keep you posted on what happens next…