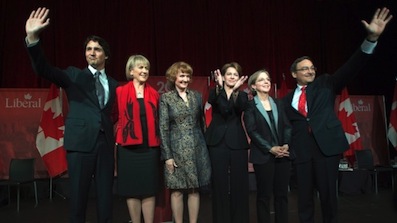 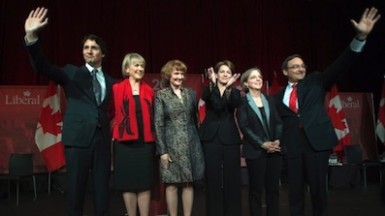 On the heels of the CARP Federal Leadership Forum – candidates attended the last debate in a series in Montreal on March 23rd, 2013.

Three days prior, on March 20th – Martin Cauchon, Joyce Murray, Deborah Coyne, Martha Hall Findlay and Karen McCrimmon had attended the CARP Leadership Forum in Toronto.  The only debate of its kind, it focused on high-level policy discussions of the issues that matter to older Canadians.  It presents a rare opportunity to get the candidates on record in a detailed and focused way.

Whereas seniors issues had been virtually absent from the Leadership debates prior to the CARP leadership forum, seniors had a much more prominent role in the final debate.  It was one of six central themes that were explored during the debate:

During the series of mini-debates (4:45 each, among three groups of candidates) – Joyce Murray, Martin Cauchon and Deborah Coyne were asked:

“As leader of the Liberal Party of Canada will you restore the retirement age to 65?”

Each of them responded thoughtfully – Joyce Murray said that she would absolutely restore the retirement age to 65:

“Yes I will, absolutely.  This is a change that was made by Mr. Harper and it is very bad for income equality in Canada.  Those on low income will pay most.  Now we know that the Parliamentary Budget Officer has told us that it wasn’t even necessary to do this.  The Liberals renewed the CPP agreement for generations to come and I think that Liberals can address this issue.”

Ms. Murray also related the experience she had caring for her own mother, concluding that seniors required more assistance to be able to age at home.  She noted that this was the preferred outcome for most seniors but that it could become very hard for them to do with no help from the government if they became ill or their circumstances changed.

Martin Cauchon made a direct reference to the CARP debate saying that he would support a guaranteed minimum income and a program to help older workers:

“So this week, in fact, we had a debate on this issue, the issue of seniors and their situation in our society.  And in fact the research has shown that the change in the age at which they are receiving the CPP from 65 to 67 really had no impact on financial issues, so why do that at the present time? What we really should be doing at the present time is to increase the guaranteed minimum income so that poor people can actually get out of poverty.  Because a lot of them are living in very difficult conditions…  My second point concerns jobs.  People work for longer and people are looking for jobs later and it’s becoming more and more difficult.  The government should intervene to make sure that companies hire these people.”

Deborah Coyne said that a Liberal Government would make seniors a priority and noted that there was nothing for seniors in the 2013 Federal Budget.  She said that although she was not entirely opposed to increasing the retirement age from 65 to 67 but she did say that she was opposed to the way that the Harper Government rolled out this change.   She said that in order to increase the retirement age in a fair and equitable manner, the Federal government should have worked with the provinces and with the Canada Pension Plan to ensure that people who were unable to work until 67 were otherwise taken care of.

“Well really, I’m not opposed to an increase in the retirement age because a lot of people continue to work a lot longer now.  The problem is the way in which Mr. Harper actually announced this.  You can do this kind of thing, only with the cooperation of the Provinces.  Obviously this will have an impact if someone can’t work until the age of 67.  And this will have an impact in terms of welfare payments and systems… As such, I think we have to look at the guaranteed minimum income level.  There are various measures you have to address when you look at this issue.  But you have to broaden, also, the Canada Pension Plan. I think that’s the fairest way of doing thing – of ensuring that people have enough money for retirement.  I think that’s the next priority for the next Liberal government.  Seniors should be a priority that’s not being addressed by the current government.  There’s nothing in the last budget for seniors.”

But perhaps the most interesting development came a little later when Mr. Trudeau (who was unable to attend the CARP Forum) decided to use on of his three one-on-one opportunities to question Martha Hall Findlay on the OAS age eligibility increase.

He would have known that Findlay was well prepped for the question and that she would have a solid answer. We suspect he was looking for an opportunity to make it know that he also believed this issue to be a priority and to have the chance to share his own views on the matter.

Here is transcript of that exchange:

JT question for MHF: So, Martha, on the theme on seniors, we heard the debate of our colleagues but I’d like to talk a little bit more about this… I’m very concerned that the government decided to increase the age of retirement for Old Age Security to 67.  And for various reasons, our seniors are often put in difficult positions.  But also, this represents a form of taxation on the provinces; the provinces will be expected to support these vulnerable seniors from the age of 65 to the age of 67.  So let me hear your thoughts on this.

MHF:  Well that’s a very good question.  We know that this is a major issue; we know that we have demographic challenges in Canada.  We know that people are working and continue to work for longer periods nowadays.  We also know that there are people who are receiving money from the government who don’t necessarily need that money.  For me it’s not a question of whether it should be 65 or 67 years or age or even 68 years of age – rather, it’s the fact that there are too many people today who are poor.   Women living alone – senior women living alone.

JT: We the Liberals, define ourselves by the way we treat the most vulnerable members of society.  And for so long we’ve had a government that made pragmatic short-term considerations. This government has created a fake controversy – a phone conflict between retiring at 65 and balancing the budget.  And the budget decision makers have said that this controversy doesn’t actually exist…

MHF (cuts in): But that’s not the problem, it’s true that the Harper Government is always trying to create divisions, to create problems… What he hasn’t done – and what the Liberal party hasn’t done either – that’s a fact… Well we’ve have problems and I can’t just say “we’ll put the age up from 65 to 67” – I would take it back to 65 because there might be people, who live alone and who are poor and who have to live in horrible conditions.  But they might just be 63 years of age. Why should they have to wait until they are 65 or why should somebody have to wait until they are 67, under Harper’s plans?  We need to establish a system of guaranteed minimum income, particularly for seniors! But for the Liberal party, it’s not enough just to say it, or to bring it out at 65… We need ideas, we need major ideas!  We need to have the courage to say: look, we’ll find other solutions, some that will really work.