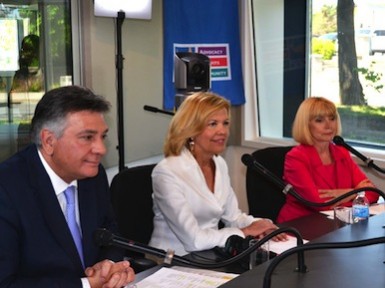 Be sure to catch the CARP debate if you missed it on May 30th, 2014. Gearing up for the Ontario election, CARP hosted a debate with the following Candidates: Charles Sousa (Liberal), Christine Eliott (Conservative) and Cheri DiNovo (NDP). If you are new to the CARP Debate, you are in for a treat! This is no stiff (and frankly unproductive) debate that allows the candidates to take turns reciting their talking points. It was filmed in front of live studio audience who participated in the questioning and followed by a meet-and-greet with the candidates that allowed audience members to continue pressing the candidates on the issues they cared about. The CARP debate strives and succeeds in doing things differently, “a breath of fresh air,” as one audience member put it.

The debate was moderated by Dale Goldhawk and Susan Eng, CARP VP of Advocacy. The two of them should probably be dubbed the dynamic duo, between the two of them, not one dubious pronouncement was left unchallenged and/or a vague response left unprobed. The result is a much more in-depth conversation than we are accustomed to getting from debates that allow the politicians to deliver their canned statements unchallenged. The CARP debate also provides the only forum that focuses on the issues of interest to older Canadians. It is a chance to get the politicians on the record while it matters and while our democratic bargaining chip is most valuable. The debate was exceptionally informative and luckily it is now available on video (below).

In this issue of CARP Action Online we have also provided members with detailed information about the different visions the parties are offering for Ontario and explained where they stand on the issues that matter to CARP members. Don’t forget to read CARP’s ESSENTIAL GUIDE TO THE ONTARIO ELECTION (it pretty much encapsulates everything you need to know), as well as CARP’s Ontario Party Policy Brief, in which we have organized the platforms according to CARP’s main priorities rather than by party to allow for easier comparison.

Most importantly don’t forget to read our lead editorial on the importance of voting.