The Middle-Age Guide to Growing Up: The Misfits - CARP
Join Donate Sign In 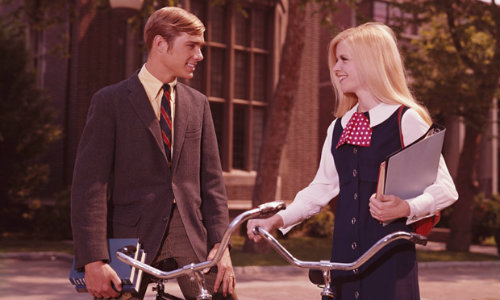 I’m a boomer, and I’m old enough that the teachers at my boarding school were not so much rigourously screened for their suitability as they were sieved out of the available teaching (and non-teaching) pool. Boarding schools didn’t pay much in the 60s because they didn’t have to. Artists, retired linebackers, remittance men, all were welcome, for a pittance of coin and room and board.

My boarding school was well thought of, we had some rich and distinguished students. But the teaching staff was decidedly off-centre and eclectic. Math and history teacher and commander of the Naval Cadet Corps was Ticker, so-called because he was as precise as a watch. He was single (a married man couldn’t live on boarding school pay unless his wife worked) and out of the Navy a number of years. He walked with the straightest back and the tightest clenched buns imaginable and he barked, rather than talked.

Blotto, so known because of a portwine birthmark on his cheek, was chaplain. He was Ichabod Crane tall and thin, and wore flapping tweeds over his clerical collar. When frustrated, he visibly fought with himself not to take the Lord’s name in vain, and would utter a strangled “Gar!”.

Gerry was the grammar teacher (I don’t think they teach grammar as a subject anymore which is a big shame). I spoke well, but never knew why or what the rules were and this bugged Gerry no end. He was that rarity, a local on the teaching staff, with a farm one county over. He would hold cross country skiing parties at the farm and serve hot cross buns and cocoa.

The physics and geometry teacher was our one true prize. The rumour eagerly traded by students was that he was forbidden to leave the country because of his secret work at the reactor at Chalk River. He was an elderly, crusty man whose sleeves covered his hands and was truly brilliant. The only time I had him as a math teacher, I scored an A+, after failing math for years. He had a saying I still can’t figure out: “I have never met an obstreperous turnip”. He smoked a foul pipe, which he often put in his jacket pocket, still lit. Fires were common.

Our choirmasters were a succession of affable homosexuals (it’s a position reserved in the boarding school community, it seems). They all had fake doctorates, for some reason, and the best of them was also our first team rugby coach, because he claimed to have been a referee for the New Zealand All Blacks. He had his favourites among the older boys, and he bought a pair of matched Norton Commandos and leathers for himself and one Ganymede No one thought this odd at the time.

One of the history teachers had been an NHL defenseman with the Bruins in the 50s. He was bald, so naturally we called him Bush. He was a very friendly man with an underlying streak of professional violence. He, naturally, coached the first hockey team and we, naturally, won a lot. In a previous entry I have described how, in those days of routine corporal punishment, he beat a 12 year old with a goalie stick so badly he raised welts that bled. He wasn’t prosecuted, jailed or cashiered. He was taken off study hall for a week (but only after our photos of the welts surfaced).

Finally, our headmaster. I respected him more than any other adult I knew, yet I never measured up to his expectations. He was absurdly handsome, like a more rugged Paul Newman. Crowned heads had entrusted him with the education of their sons. He was a patriot, religious, right thinking and honourable, and I pissed him off no end. He expelled me from the school twice (but ensured I was accepted at University). The first time was for blasphemy (of which I was guilty) and the second time for drinking (of which I was not).

I take the mickey out of my five years in that drafty school, but I had a lot of fun. The teachers, though odd, were all interesting, and more important, interested. They lived (most of them) at the school, and were available all day and most of the nights for chats and advice. There were no girls, which meant our social development suffered somewhat, but we were that much more delighted and less jaded as a result, when we broke out into the real world.

Oldest brother and I each attended for 5 years at a cost which practically beggared our father. What he spent a year in the mid 60s, though, wouldn’t buy textbooks there today, and  now they have a multistory gym, a state-of-the-art theatre, rink and field house and, most of all, girls. I visited for a 40th reunion recently, and was astounded at the modern palace of learning the creaky old dump had become. It sure looked slick, but I bet they screened their teachers a lot more closely now, and didn’t have nearly the shady, eccentric fascinating mix of misfits who taught me.