The St. John’s-Avalon Chapter of CARP in cooperation with the City of St. John’s hosted  a flag raising ceremony at the St. John’s City Hall to mark National Senior’s Day. Mayor Dennis O’Keefe and CARP Chapter Chair Edgar Williams, supported by members of the City Council and CARP, hoisted the CARP Chapter Flag in front of City Hall to remind all of the important contribution of our seniors in building the city that we know today. 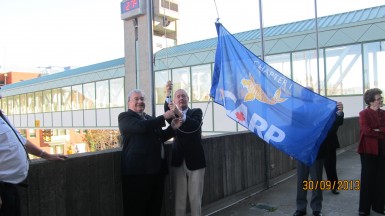 In conjunction with CARP Chapters from coast to coast,  the St. John’s-Avalon Chapter, commemorated National Senior’s Day with the reading of a Proclamation by the Mayor  in the Council Chamber. Mayor O’Keefe invited Chapter Chair Ed Williams to address City Council at its weekly televised public meeting. In so doing, he thanked the Mayor for the cooperation of the City in promoting National Senior’s Day and for recognizing the efforts of CARP in advocating on issues of concern to seniors in our community. The Mayor indicated that he was pleased to do so since not only was he himself a senior, but so also was half the members of Council.