FOR IMMEDIATE RELEASE
December 12, 2013
Toronto, ON: In the run up to decision day[December 16] on the CPP increase, CARP released its Open Call to Act signed by CARP Chapter Chairs from BC, Alberta, Quebec, and Nova Scotia – provinces which have yet to signify their agreement to increase the CPP. Following a meeting at Queen’s Park yesterday, the Chapter Chairs will contact their respective provincial finance ministers, bolstered by the support of the Ontario government leadership.
The CPP amending formula requires the agreement of two-thirds of the provinces with two-thirds of the Canadian population plus the federal government. The decision to change the CPP is normally taken at the semi-annual meeting of the federal, territorial, provincial finance ministers – like the upcoming meeting in Meech Lake on Monday December 16th.
The CARP Chapter Chair delegation met with Ontario Premier Kathleen Wynne, Finance Minister Charles Sousa, and Minister for Seniors Mario Sergio at Queen’s Park on December 11, 2013, urging Ontario’s leaders, who are on side with a CPP increase, to apply pressure on their colleagues to come out of the Finance Ministers’ meeting on Monday with a firm agreement to increase the CPP.
[QUOTE]
“We are in the final stretch. The research is in and the arguments have been considered. The choice is now up to 13 finance ministers to decide whether they will increase the CPP or again refuse to act, as they have done for three years now.
“CARP members have clearly stated that CPP increase is a ballot issue. Now our chapter chairs in the most recalcitrant provinces will make a final personal pitch – not for themselves but for future generations.
“This is the chance to improve retirement security for a generation. Whatever happens on Monday, we want to ensure that it takes place in the full glare of public scrutiny”, said Susan Eng, VP, Advocacy for CARP
In a recent CARP Poll™, 71% of CARP members say government doesn’t deserve power if CPP is not expanded.
CARP has 57 local chapters across the country, at least one in each province. They are calling on their respective Finance Ministers, especially in the recalcitrant provinces, to support an increase to the CPP. The chapter delegation that met with the Premier and signed the Call to Act [descriptions below] were selected because they come from the provinces that have yet to signify their support for CPP increase. Those provinces are needed for the province count and population figures in the CPP amending formula.
Ontario, PEI, Manitoba and Newfoundland-Labrador have signified their consent. PEI Finance Minister Wes Sheridan
Any change to the CPP agreed upon on December 16th would not take affect for 3 years and it may be stipulated that any increase be phased in.
Coverage of the CARP Delegation meeting at Queen’s Park:
News conference December 11, 2013: Premier Wynne, Finance Minster Sousa
Chapter chairs on need for CPP increase
Globe and Mail –  “CPP expansion imperative Wynne says in pension push at Ontario Legislature”
CHCH News: “Wynne supports CPP enhancement” 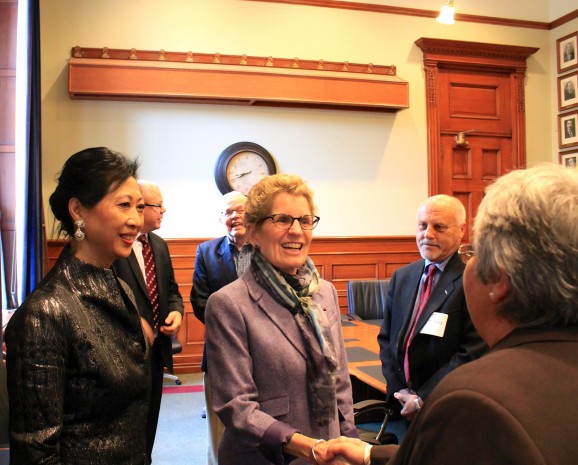 CARP is a national, non-partisan, non-profit organization committed to advocating for a New Vision of Aging for Canada, social change that will bring financial security, equitable access to health care and freedom from discrimination. CARP seeks to ensure that the marketplace serves the needs and expectations of our generation and provides value-added benefits, products and services to our members. Through our network of chapters across Canada, CARP is dedicated to building a sense of community and shared values among our members in support of CARP’s mission.
For further information, please visit our website: www.carp.ca or contact:
Sarah Park   416.607.2471
Media Relations, Policy Researcher and Coordinator
[email protected]
Michael Nicin   416.607.2479
Director of Policy
[email protected]
Siobhan MacLean 416.607.2475
Media and Communications Coordinator
[email protected]